Impressions From Out and About 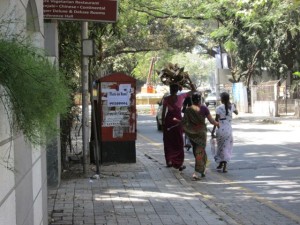 Any place that takes you out of your ordinary is unusual and interesting will seem exotic and fascinating. That is certainly true of India. Not only are we half way round the world and half way round our clocks, its 10 1/2 hours earlier here, but we are looking at the world through very different cultural eyes than people here. Sights, sounds, smells, tastes, habits, ways of moving; things that are second nature to us at home are all different and even odd seeming. Walking around is like being a child again just beginning to see the world for the first time, seeing how people are, how they interact and how things work. I find I have to restrain myself from taking pictures all the time because it all fascinates me. Especially people’s faces. But I really can’t just walk around taking snaps of people who come walking toward me. So I have to content myself with the broader view. I’ve included here some aspects that are particularly different from what you find on the streets in our cities. Although you miss the whole atmosphere of the hustle and bustle, and particularly the sounds and the smells. 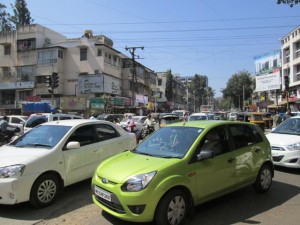 Typical traffic congestion, although this is moving right along. This is at the corner near my apartment. 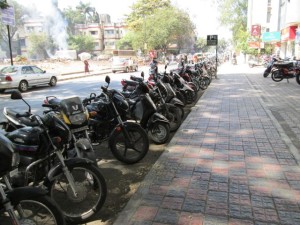 Ever present motorcycles and motor bikes; either parked at the curb, on the sidewalk or whizzing down the street.

Horns here are used as a way to communicate.  At home I think we use horns as a way to indicate annoyance or anger. Here they are used to announce oneself, to let the pedestrian know a rickshaw or motorcycle, truck or car is baring down on them. Or to let another vehicle know that one is behind and about to pass. So there is a constant cacophony of various tones of beeps and honks and squeaks. They begin to lessen around midnight or so and start up again by 7. And of course there is the vehicle noise itself. Also in the early morning there are birds; I don’t know what it is but there is one particular bird that has a variegated, rising sharp song that begins as it gets light, as well as crows. And then there are the doves outside my windows. And dogs who bark periodically during the day and particularly in the evening for a while. 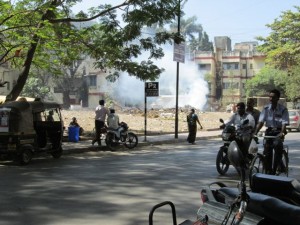 Burning Trash in a local dump (across from a row of shops including the Maharashtra Grocery Store.)

Maharashtra Grocery Store, where many of us stop on the way home from class for small items: milk, bread, nuts, cereal etc.

The air here has its own particular aroma. It must come from a combination of the exhaust of diesel, and many fires and perhaps the spices used in cooking as well as the factory emissions which I read are poorly controlled. You begin to be aware of it as the plane is close to landing in Mumbai. It is also fueled I think from the burning of dung fires across the nation, although I believe those are fewer now in this area. In my travels in the past I have seen stacks and stacks of the round patties drying and also the women making them. I do not know how wide spread their use is now. The pollution is far worse now than in the past. There are articles in the news that talk about it. I can feel it and react to it. I don’t have a daily paper this year and don’t know what if anything is going on politically about it. There is a grime that coats everything daily. That is what one can see and it makes me wonder what are the microscopic parts that we are breathing that are not visible.

I’ve seen this woman several times. But only this once with the load on her head. 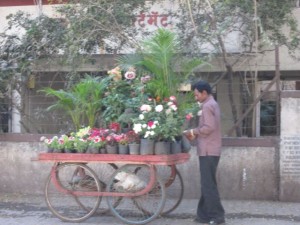 That said, India is a fascinating place with many wonderful aspects. The culture is centuries old and has much to teach us. I find the swirl of colors and impressions both fascinating and transporting in the sense that it makes me move out of my regular ways of thinking and being. It is always helpful to have to step out of your ordinary and look through different eyes. You see differently and you see yourself differently. 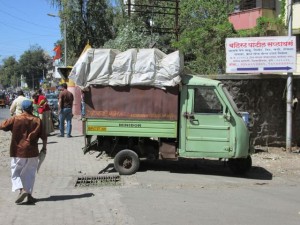 There are many of these three wheeled delivery vans now, some are very colorful. 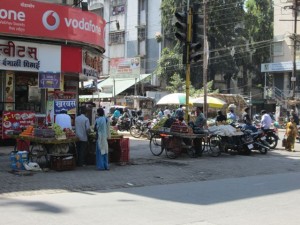 Typical street corner with fruit and vegetable vendors. This is close to my apartment. 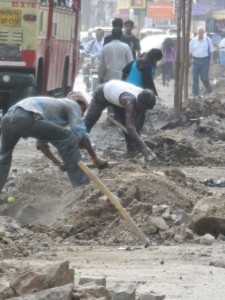 They are digging barefoot or in rubber thong sandals to get at the sewer pipes. There is a lot of this in the area and down the street the Institute is on. 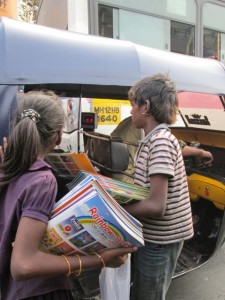 These children were selling coloring books in the middle of (lots) of traffic. At the time we were in another rickshaw stopped at a light, just inches from them.

Nothing is achieved by a mind that doubts.

Find Us - Directions to our Studio